The road resolves current bottlenecks and guarantees traffic flow in the Holland Rijnland region, particularly around Leiden and Katwijk. The 2,500-metre-long tunnelling shield is particularly special. Haitsma Beton is involved in no fewer than six structures along the RijnlandRoute. The latest achievement is the assembly of precast inverted T-beams for a structure at the Leiden-West junction.

The RijnlandRoute not only comprises a new link road between the A44 and A4 to the southwest of Leiden, but it also involves the widening of the A44 between Leiden-West and the new Ommedijk interchange, where the new road joins the A44. The A4 between Zoeterwoude-Dorp and the new Hofvliet interchange on the A4 are also being modified. The new N434 link road passes through a tunnelling shield of some 2,500 metres. The first part of this substantial project is being carried out by international contractor consortium COMOL5, contracted by the Province of South Holland. TBI companies Mobilis and Croonwolter&dros as well as VINCI Construction Grand Projects and DEME Infra Marine Contractors are all working together in this consortium.

The large-scale infrastructure modifications and the presence of many waterways and intersecting roads necessitate the construction of approximately 20 new structures. This partly concerns modifications to existing structures. Haitsma Beton is working on four structures that form part of the widening of the A44 between Leiden-West and the Ommedijk interchange. Prefab beams are also being supplied for two structures on the A4. The assembly of the largest structure has now been completed successfully: the widening of the bridge on the A44 over the Oude Rijn. A new bridge has been constructed to the west of the existing bridge over the Oude Rijn. This takes up the same space as ten football pitches, each with seventeen HRP rail beams and two edge beams.

Construction works on a new structure on the A44 to the north of the Leiden-West junction is currently in full flow. This structure, which passes over a cycle path and bus lane, also includes the A44 slip roads. The project was divided into four phases to reduce hindrance to traffic. In the end, for both the exit and entrance, 33 HKO precast inverted T-beams of approximately 9 metres were installed, with six custom-made edge beams. The widening of the structure on the A44 involved 84 HKO beams and six edge beams, each approximately 9 metres in length. Given the significant local traffic congestion, all beams were supplied ‘just in time’. A challenging job that is in safe hands with Haitsma Beton. 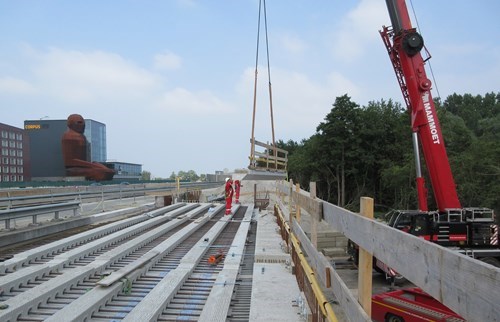