Haitsma Beton supplied a large number of columns, beams and driven piles for this project. Offering a full service to the client and being able to adapt and deliver quickly resulted in Haitsma Beton obtaining the contract for this mega job.

Zalando was originally a German online store for shoes, clothing and fashion accessories. The German e-commerce giant is now constructing its first fulfilment centre in the Netherlands. The distribution centre will be Zalando’s largest and most automated DC. Somerset Capital Partners and USAA Realco-Europe are developing the building. It is being constructed by Wouters Schijndel construction company. ‘It is indeed a huge project. With a project of that size you could call it three projects in one,’ stated Franco Nooijen from Wouters Schijndel, who is taking on the project management together with Joan Aarts.

The Zalando DC will have over 100,092 m2 in warehousing, a 29,927 m2 mezzanine and 12,100 m2 in office space. The starting point for the distribution centre development is BREAAM Very Good *** certification. Construction started last summer and, according to schedule, the first parcels will leave the premises some two years later, in summer 2021, destined for customers in the Netherlands, Belgium, Luxembourg, France, the United Kingdom and Spain.

Wouters Schijndel gave Haitsma Beton the contract to supply 728 square columns of 400 to 750 mm and 721 concrete beams from 6.70 to 17 metres. A cantilever beam system was selected, in which the beams run across the columns, combined with concrete hollow-core slab floors. The columns are located in an 8 x 12-metre grid in the central section of the distribution centre and are 3.4 to 8.5 metres long. The left and right sides (together making half of the surface area) are intended for manual and partly automated order picking and contain fully free-standing picking towers. The shipping areas are located in the central section which, due to the high loads, is constructed from precast concrete. A steel roof construction will be installed on top of this structure.

‘When constructing a distribution centre, the construction process is a train of activities that flow one after the other,’ explained Aarts. ‘We already started laying and pouring the foundation just after the start of the pile driving. After that we quickly started installing the columns, beams and floors, while a distance away they were still pile driving. There are always time constraints on these kinds of projects, so you need reliable partners. Haitsma Beton is such a partner. Together we reached a solution using columns, beams and concrete hollow-core slab floors.’

Haitsma Beton is also supplying around 3,500 driven piles for this project. Nooijen: ‘Haitsma Beton proved able to produce the driven piles in advance via a pre-contract. As not all details were known, at 20 metres, the driven piles were somewhat longer than proved necessary in the end. But a faster start was more important to us than the additional costs associated with a somewhat longer driven pile. Haitsma Beton also advised using pile-driver Gebr. van ’t Hek for the pile-driving; a company that has sufficient capacity and was also able to start quickly. This working method meant that we could already start pile-driving three to four weeks after the issue of the final contract. We did all this on the basis of mutual trust.’ 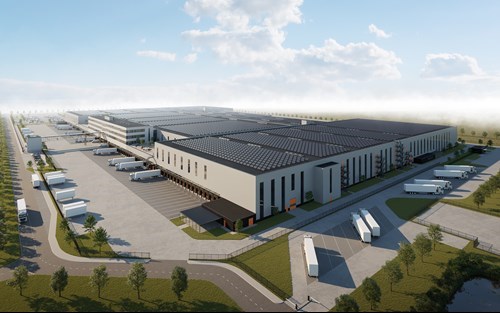